THE SCIENCE & ART OF GROUNDING FOR GOOD HEALTH

Have you ever wondered exactly what being grounded means and why does it even matter?

Grounding techniques are used by professional athletes to people with chronic illnesses and anyone looking to improve their health, vitality, and emotions.

What does grounding actually mean?

A definition from an electrical perspective is an electrical device is grounded when it’s connected to the ground in a way that allows excess energy to leave the system. This is also called being earthed. Think about a three-pin plug, that’s the UK version and the third pin is the earth. It is a way to ensure there is an energy connection to release energy.

You are also electrical. Your heart, your brain, your nervous system, your muscles, and your immune system are examples of electrical subsystems operating in your bioelectrical body. Being grounded means there is a natural exchange of energies between you and the earth and you also have energetic roots that hold you steady on the earth.

How do your energy systems actually ground?

Certain meridians, these are like highways of energy in your body, connect into and draw energy up from the ground. Meridians of the body have been mapped for thousands of years in ancient Chinese medicine and more recent research at Seoul National University confirmed the existence of meridians, which they refer to as the “primo-vascular system.”

Each foot has an energy vortex that pulls energy in from the earth. There is also a key meridian point on the sole of each foot and several meridian beginning and endpoints located on the toes. These all bring fresh energy into your body that positively impacts your organs, tissues, and cells. 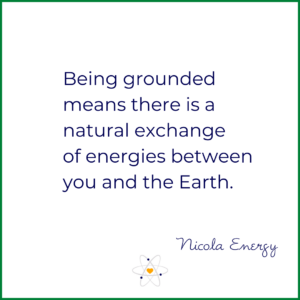 Before we go any further, just a little bit about electrons and atoms. The surface of the earth is endowed with electrons. Electrons are subatomic particles. They can be found in every single atom, but also as free particles. When the great American physicist and bongo drums player Richard Feynman was asked to think of a single sentence that would convey the most important scientific knowledge we possess, he answered simply, “Everything is made of atoms.”

I wanted to share that to convey the fact that if everything is made of atoms, and all atoms contain electrons, then they really are a part of all things, but the electrons on the surface of the earth are not in atoms. As I said, they are actually free. This means electrons can be the primary carriers of electricity in solids, which means they can get in the flow and create an exchange between the earth and your body. Electrons have a negative polarity. They’re negatively charged and they create a flow of energy through your body which acts as a magnet with a polarity.

Imagine that energy connection between the earth and you. The most ideal situation is your bare feet on the earth, grass or ground, even concrete to allow this exchange.

What are the health benefits?

Staying grounded protects you. Being grounded supports organs, tissues, and the cellular function of your entire body. It helps with inflammation, pain relief, and aiding sleep, circulation, and can also decrease stress in terms of cortisol response. Everyone is susceptible to inflammation and inflammation is really being revealed as the critical link between our lifestyle and the soaring global increase of chronic diseases.

There are instant changes that can be measured when you are connected to the earth. For example, double-blind trials using EEG and EMG machines show that readings are significantly influenced within half an hour of test subjects being grounded and actually also within T seconds, so EEGs record electrical signals in the brain and EMGs record electrical signals in muscles. Double-blind means neither the researchers or participants know which is the live test group, and this is really important to ensure there is no bias. The science behind this and specific case studies can be explored more in-depth in a brilliant documentary called Earthing and book Earthing: The Most Important Health Discovery Ever.

Let’s talk about the psychological aspects.

Being ungrounded can be a massive contributing factor to these psychological aspects. If you are physically grounded, it’s a lot easier for you to stay emotionally grounded. This is when your energies and emotions move through your physically grounded body freely and are wholesomely discharged through yourself: your breath, your thoughts, and your actions. 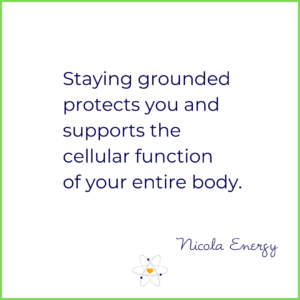 What does it mean to be spiritually grounded?

This is the information held in the vibration of this energetic alignment.

If you want to ensure you can manifest effectively in your life, being grounded is part of the energy basics to help you do this. It’s the foundation. If your energy is scattered, what you manifest and attract to you will be scattered.

You want to bring your energy down and create a physically embodied connection with the Earth. Make your energy stable and allow abundance to flow through you. This is the art of grounding and my intention is to help you do that.

Click HERE for my free Grounding workshop [25 mins] where you can experience and learn a simple energy medicine Grounding sequence.